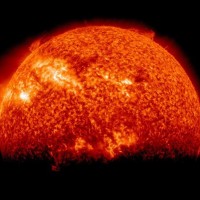 As we observe the 40th anniversary of the first Earth Day, let’s take a sideways glance at some amazing photos of our sun! NASA’s Solar Dynamics Observatory is a space telescope that watches the sun in unprecedented detail. One year ago today SDO revealed its first look at the sun to the world. Ever since, the telescope has been busy watching the sun in all its glory.


The sun has shifted from its quietest period in years to the beginning of a new, active solar cycle. It has seen loops of plasma that dwarf the Earth tracing the sun’s magnetic field, early stages of massive explosions that send hot charged material ripping through space, and sunspots dancing across the solar surface.