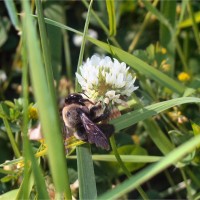 This bumble bee is lapping up nectar from a beautiful Snowball bush, Korean Spice Viburnum. Bumble bees live in colonies and collect pollen (protein) and nectar (carbohydrate) from wildflowers and crops to feed their young. As an added benefit, they pollinate flowers while working tirelessly for the colony. The pollination process is amazing. A bumble bee builds up electrostatic charge during flight and as it lands on a flower the grounded flower’s pollen adheres like a magnet to the charged bee’s body. Conversely, as the bee goes to another flower, the charged pollen adheres to the grounded stigma, which is the most grounded part of a flower. The process continues ad infinitum.

As part of the Great Sunflower Project, nearly 100,000 participants have signed up to plant sunflowers, count bees, and submit data online. Researchers use the data collected and submitted by citizen scientists across the United States and Canada to map pollinators and pollinator services to see what area bees are doing well and where they need help.

The Queen bee does most all the initial work in constructing the nest to lay her eggs. Once the worker bees are born, the Queen is then free to spend her time laying eggs and taking care of the young while workers scour gardens and fields for food.

The bumble bee is recognized by its long black and yellow body hair that makes it appear ‘soft and fuzzy’. Since BBs don’t have ears, they ‘hear’ through the vibration of sound waves.

In his first (1859) edition of On the Origin of Species, Charles Darwin wrote of “humble-bees”…”the visits of bees, if not indispensable, are at least highly beneficial to the fertilisation of our clovers; but humble-bees alone visit the common red clover (Trifolium pratense), as other bees cannot reach the nectar. Hence I have very little doubt, that if the whole genus of humble-bees became extinct or very rare in England, the heartsease and red clover would become very rare, or wholly disappear.”

“The number of humble-bees in any district depends in a great degree on the number of field-mice, which destroy their combs and nests; and Mr. H. Newman, who has long attended to the habits of humble-bees, believes that ‘more than two thirds of them are thus destroyed all over England.’ Now the number of mice is largely dependent, as every one knows, on the number of cats; and Mr. Newman says, ‘Near villages and small towns I have found the nests of humble-bees more numerous than elsewhere, which I attribute to the number of cats that destroy the mice.’ Hence it is quite credible that the presence of a feline animal in large numbers in a district might determine, through the intervention first of mice and then of bees, the frequency of certain flowers in that district!”

“Bumble bees are in danger in many developed countries due to habitat destruction and collateral pesticide damage. A decline in bumble bee numbers could cause large-scale changes to the countryside, leading to inadequate pollination of certain plants. The world’s first bumble bee sanctuary was established at Vane Farm in the Loch Leven National Nature Reserve in Scotland in 2008.”

For more information or to find out how you can get involved with the Great Sunflower Project, visit greatsunflower.org.